I got the opportunity to revisit Bulgaria again this May. Some years ago, Peter Bolton and I managed a 5 year project in municipal and regional development and to do this we had to build a team of Bulgarian consultants. Over the course of the project they became our friends and this led to them setting up their own consultancy which they called EKIP, which French speakers will spot as meaning Team.

EKIP decided that they wanted a 10 years on reunion and they arranged it for a short flying visit to Plovdiv in the centre of the country, which thanks to Ryanair is served by regular flights. Our friends met us at Plovdiv airport and as we relaxed over a glass of Melnik wine the years slipped away and it was as if we had never been away. We even went to a restaurant we had frequented a lot, Happy Grill.

Another thing that hadn’t changed was the ridiculous short ‘pelmet’ skirt the waitresses were obliged to wear; something I thought was in these days of equality a thing of the past.We stayed in the wonderfully named Hotel Dafi which was good and cheap and visited the old town before going to the reunion in Hisar, a spa town where we were able to catch up with each other. 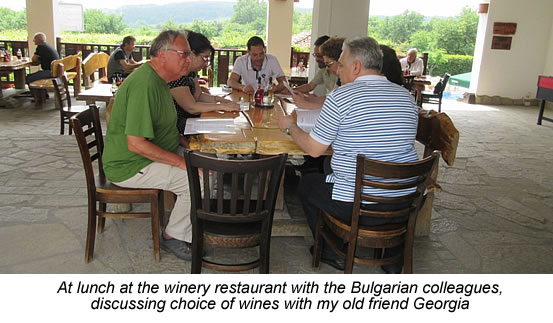 I was delighted to learn that my Bulgarian friends have had substantial success in working with the Roma community. This is the most disadvantaged community in the country and generally (but not always) they are a lot darker skinned than Bulgarians. They are said to originate in the Indian sub continent.Funded by the American / Bulgarian fund, our friends in Plovdiv are running a micro finance scheme to help people start their own businesses.

There is a lot of community development in the project in order to build capacity for self or group based employment. They have a range of successful outcomes mainly in the agricultural field but also in the service sector.The American funder is so delighted with the project that they have rolled on the funding and it is now in its 11th year and funding secured for a further 3 years.

Although American financed, the project fits perfectly with the EU Social Inclusion objectives and is recognised as such. It’s a large project with a team of 8 consultants working across the country.They tell me that the first essential stage is the building up of trust between consultants and community, followed by community development to identify needs and opportunities.

All too soon it was time to go home, sadly without time to see my friends in Sofia; however as a group we visited a very impressive winery which is close to some Thracian tombs. The winery has developed a fine restaurant, a spa and hotel accommodation and its so popular that booking is essential.

At Hisar your correspondent could not resist the massage and sauna facilities, this time with buckets of ice available to rub over the body after the sauna. Sounds strange but I can heartily recommend it.

Now I understand why Scandinavians rush out of the sauna to roll in the snow; it doesn’t feel cold but very exhilarating!

Next time I will explore how the country’s economy is developing.

You can email Peter here – petergballyholme@btinternet.com