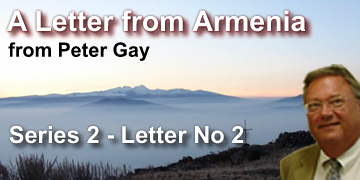 On economics and politics

I found that the country is dealing with the aftermath of the Presidential election. When I was here in January, the hustings were on and everywhere we went in Syunik province the President was also there seeking votes.

At that time, everyone expected the President to be re-elected and that is what happened.

We also came across international election monitors who were getting ready for their role in observing and verifying the election as free and fair.

Now the election is over, the losing candidate is saying that the election was not free and fair, that it was stolen from him and he is the rightful President.

There will be an inauguration of the President this month but the losing candidate is also holding his inauguration as the ‘real’ president.

Of course as an international consultant I can’t have an opinion on this and neither do I have.

However, the real issues remain, and they are interlinked: how to get the economy moving, how to keep talented young people in jobs and how to make peace with the neighbours.

Making peace with the neighbours is a big issue and apparently the candidates made much of their ability to prevent another war as a way of influencing voters. Everyone is afraid of another war, no-one wants it, yet the border with Turkey remains closed and the border with Azerbaijan remains closed and mined. Also the Azeris are occupying some Armenian territory and vice versa, so not a sustainable situation.

There are those here who would like to see a peaceful settlement with Azerbaijan leading to a ‘common market’ between the two countries and Georgia. They argue that this would foster economic development and also give Armenia free access to the both the Caspian and the Black Sea.

Looking at how EU membership (leaving aside grants) has developed the Irish economy, perhaps those looking for a greater Caucasian union have a point.

But this macro economic panorama is distant from my humble role here which is to initiate the closure of ‘special’ schools for disabled children and to enable them to be integrated into mainstream education.

We go to the Syunik region for a series of stakeholder consultations this week. As is usually the case there are so many stakeholders, all with their particular resources, position and needs. Our job is to find consensus.

Closing the schools would be easy if one didn’t care much how well the children and their families coped with the change or if one didn’t care about the staff at the special schools. But we do care about these things as we believe that unless there is strong supportive work with the families, development work in the inclusive schools, after school care and viable support for children with no families to go to, the whole process would be a disaster.

So we need not just the Ministry of Education’s support (which we have) but also the Regional Authority, the Ministry of Labour and Social Issues, the Councils and the staff to be supportive and most importantly, the families.

More about how we get on in the next letter.