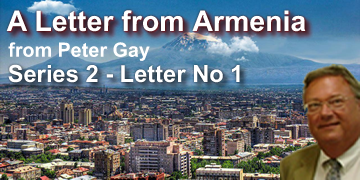 I arrived yesterday evening to a warm balmy Yerevan – 24°, definitely Spring, if not Summer by our standards. The trees are green and people are wandering around the city in shirt sleeves, t shirts and short skits in evidence.

Yet we overflew some very high snowy mountains not far from Yerevan. The flight this time was interesting because it was in day light so I was able to look at Romania from the air, the Danube delta, Constantia and the Black Sea or Le Mer Noir as the Air France captain called it.

I was met by Vassily and got to know him better on the way in. This letter is really his story. Although employed by UNICEF as a driver, he is a trained actor who is active in Armenian television soap operas.

He told me that he trained as an actor in the Soviet days, expecting a good career in it. However, when the change came and Armenia became independent, the economic hard times came as the markets in Russia closed causing factories to close. In Soviet times the factories made components that were shipped off for assembly in Russia; the workers were never sure exactly what they were making, just following orders.

In the new economic situation there was no demand for actors and it became impossible to live as one. So Vassily used his skill as a driver and headed for Poland where long distance lorry drivers were needed. After some years he decided to come back and got the job with UNICEF.

At the same time, television was starting to make dramas and needed local actors. However, the pay was so poor that no actor could live on television alone so Vassily works part time in acting, mainly at weekends.

He is a large man, big in every respect and is in demand for parts as oligarchs and politicians. Neither occupation commands much respect but probably the oligarch, the one who has come up on top with control of businesses and money, driving around in top end Mercedes is the least liked.

All actors like to play the ‘baddies’ and Vassily is no exception; when the public stare at him in the street with distaste, he knows he has succeeded.

He does not drive a Mercedes but an old French open top car, he told me he was approached by a member of the public and asked, why are you driving this crappy old car when you can afford a Mercedes? Similarly when he does his shopping at the market, people ask him, don’t you have minions who can do this for you?

Another of his triumphs was over hearing someone saying about him –‘he looks trustworthy but believe me he isn’t!’

Sadly, its still not possible to make a living as a full time actor and the producers are always looking for ways of cutting costs such as reducing preparation time and having the lines stuck to the props where the camera can’t see them.

I guess this will continue as long as Armenia remains a low income country (Known as a LIC to you international consultants – you will also know what MIC means –Middle Income)
Armenia has just had its Presidential election, more of which in the next letter