The previous instalment described how, and why, business plans seems to have become the officially advocated essential requirement for all new ventures. They appear to have been invented for, and are widely advocated by, business professionals such as accountants, bankers, academics, consultants, and agency staff. But they were not invented, and are often not appreciated, by those who are starting new ventures – because they do not actually appear to help. For instance Babson College in Massachusetts, USA is widely known for its entrepreneurship teaching. However a survey conducted in 2009 of former students of who had graduated between 1985 and 2006 and who had since then founded one or more full-time new ventures found that in only about half of the cases was there a written business plan before the business began operating. Also the survey concluded that overall the subsequent performance of all the new ventures was not related to having such a plan[i].

Business plans could be said to be a big business tool – based on a view of a business as an assembly of its components – which is assumed to apply also to small businesses. But over fifty years ago Edith Penrose suggested that the distinctions between small businesses and big businesses are such that they must be looked at differently: that ‘we cannot define a caterpillar and then use the same definition for a butterfly’[ii]. Unlike many professional advisers and supporters whose main concern may be to avoid association with failure, those staring new ventures are often driven more by the attractions of possible success and stand to gain more if they have a big success than they might lose if their venture fails (especially if they do not put at risk more than they can afford to lose). Also some new ventures do not turn into a business, and certainly very many do not turn into big businesses. There are thus good reasons for thinking that big business reductionist thinking, as reflected in business plans, is not going to be a helpful guide to new venture creation.

What might help new ventures? First, it is suggested, it should be recognised that they are not small big businesses and starting them has much more in common with explorations than with big businesses processes. Secondly, it makes sense to look at what successful entrepreneurs actually have done, an approach advocated by Saras Sarasvathy.

Saras Sarasvathy studied 27 ‘expert’ entrepreneurs ‘who, either individually or as part of a team, had founded one or more companies, had remained a full-time founder/entrepreneur for ten years or more and participated in taking at least one company public.’[iii] From her findings she concluded that these entrepreneurs mainly believed that the future was uncertain and not predictable, and that they broadly followed a set of principles which she labelled ‘effectuation’.

Her work revealed that ‘expert entrepreneurs distrust market research’ and they have ‘a profound distrust of attempts to predict the future’.[iv] If it is considered that the future is not pre-determined then it is logical to think that it cannot reliably be predicted in advance but potentially it can be shaped by the entrepreneurs’ actions. The underlying message here is that if the entrepreneur foregoes business planning because he/she thinks it is at best a stab in the dark or at worst a waste of time, they will be less constrained by the business plan and thus exert more control over shaping their environment. For instance they won’t feel hemmed in and will tend to explore various options as opposed to sticking to the option predicted in the documented plan.

There is also evidence to indicate the futility of much predictive market research. If the future is unpredictable, then much market research which attempts to forecast how consumers will react to a product or service offering must be viewed with considerable suspicion – and yet business plans are constructed around such sales forecasts. This view of market research is supported by Graves in his book, Consumer.ology, in which he reveals ‘why the findings obtained from most market research are completely unreliable’ and suggests that ‘market research is a pseudo science … and the beliefs under-pinning it are false’.[v]

Traditionally, Sara Sarasvathy suggests, entrepreneurs were thought to pursue a causal approach in which they fix on a target and then try to cause it to happen – like deciding what dish to cook, selecting a recipe, assembling the listed ingredients and then following the instructions to prepare the dish initially chosen. Instead she found that, most of the time, most successful entrepreneurs follow an effectuation approach. This she likens to preparing a meal, not by starting with the selection of a target dish, but by considering the ingredients available and then deciding how they might be put together to create a dish, based on the abilities and ideas of the chef. She has identified five key principles of this effectuation which are listed in Table 1. 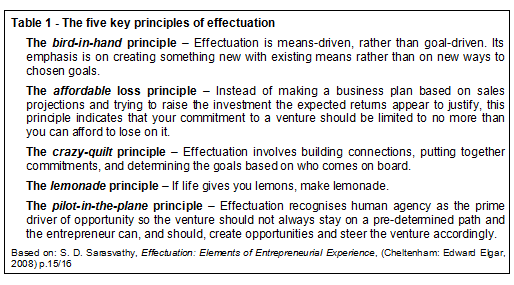 In the next instalment a set of principle for new venture explorers will be suggested, based on an effectuation approach.

No of Visitors since June 2020