The hegemony of the business plan 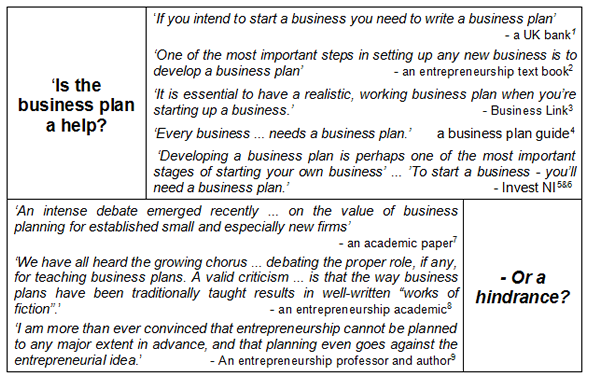 If you are thinking of starting a new venture then most official sources of advice will assume that you are actually going to start a business and advise you that a business plan is the essential, and accepted, initial requirement any such venture. Now this veneration of the business plan is being challenged, but why has it gained so much credibility in the first place?

It has been suggested that the business plan was invented by bankers or, if not, by accountants or other professionals. It also seems likely that business plans have been advocated by professionals for the start-up of larger-scale ventures so that they can better understand the risks involved in backing a bigger venture and thus better understand its component functions.

These components include production, marketing, finance, human resources, and management and are often undertaken by separate departments. Interestingly, academics and/or trainers, similar to those offering advice for start-ups, often teach the component parts of business studies as separate business functions.

This approach which often leads to disjointed business thinking appears to have started with big businesses and their component functions and then it is assumed that the same methods can be applied to smaller entrepreneurial ventures. Consequently it has become widely accepted that, as businesses, small businesses must also need business plans.

From the perspective of many professionals dealing with small businesses, business plans are clearly a useful tool because:

Therefore, probably because they have been taught that they are the right thing to do, because business plans suit their purposes well, because everyone else seems to advocate them, and because they often see no alternative, business plans have become the tool of choice for many business professionals. As a result, this has given rise to the notion that the business plan is the essential first step for all start-ups.

But there is an alternative, and often it can be more helpful for new start-ups. It will be described in the next instalment.

No of Visitors since June 2020